With the first half of the NBA season in the rear view mirror, let’s see what exciting games are in store for the start of the second half.

Brooklyn enters play at 19-40, while the Hornets are the 10th seed in the Eastern Conference at 24-33. Neither team has been trending well lately, as Brooklyn is “dead” on the Team Strength Oscillator versus “ice cold down” for the Hornets. Charlotte holds a +6 to +2 edge on the Power Ranking Indicator are are tied for first in Team Volatility. Given that they are the favorites, this bodes well for Charlotte in their first meeting between the teams this season. The Hornets will win this one without too much difficulty.

Both teams have work to do in order to make the playoffs. The Knicks are 2-8 over their last 10 and 11th in the Eastern Conference, while the Magic are 18-39, second to last in the conference. Orlando has a +11 to +1 advantage on the Power Ranking Indicator and “average down” versus “dead” on the Team Strength Oscillator. Orlando has won the first two games between the teams this season. The Knicks are third in Team Volatility and are road underdogs. The pick is the Magic at home in a six to ten point win.

In perhaps the best match up of the day, the Wizards come into play fourth in the Eastern Conference, a game and a half behind the Cavaliers. Both teams are 7-3 over their last ten. Cleveland is “burning hot” and +25 on the Power Ranking Indicator, while the Wizards are “average up” and +18. The Cavaliers have won both games between the teams this season and as a home favorite, see that trend continuing. I expected a close battle with the Cavaliers pulling away a bit later in the fourth quarter.

The 76ers come in winners of their last five and 30-25 on the season, while the Bulls are 2-8 over their last ten and 20-37 for the season. The teams have split the games this season, both winning at home. Not surprisingly, the 76ers hold a +26 to +10 advantage on the Power Ranking Indicator and “burning hot” versus “ice cold up” on the Team Strength Oscillator. Although on the road, the 76ers are likely a slight favorite and being sixth on the Team Volatility Oscillator bodes well. I see the 76ers continuing their hot play, winning to go one up in the season series.

The Thunder are part of a six-team pack in middle of the Western Conference playoff picture, while the Kings are near the bottom at 18-39. However both teams are 4-6 over the last ten, so the Kings actually have a +9 to +7 edge on the Power Ranking Indicator. Neither team is faring well on the Team Strength Oscillator, “ice cold up” for the Thunder versus “ice cold down” for the Kings. The teams have split so far this season and although Sacramento is at home, have to lean with the overall better team here and that is the Thunder.

The Clippers look to make a push back into the top eight in the Western Conference, while the Warriors attempt to keep pace with the Rockets at the top of the conference. Golden State has dominated in head-to-head match up, winning all three this season. They hold a +24 to +19 advantage on the Power Ranking Indicator and “burning hot” versus “average up” status. Los Angeles will be a road underdog and they are fourth in Team Volatility. I see a relatively comfortable win for the Warriors in this one. 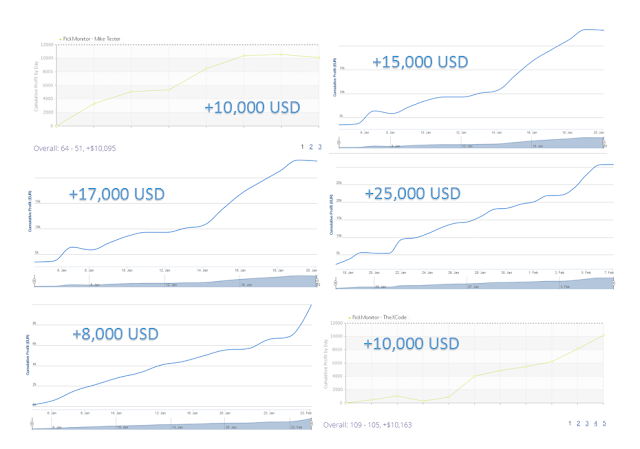 We had 3 more before doubled as well last year !

Remember only proven systems can bring you long term profit on sports investing.

I hate to see you still missing all the winners. And today I have a really good deal for you.

Receive full instant access to all systems and picks for 75% OFF just $49/m instead of $199/m. You can cancel any time, no risk.

Join Zcode system and get instant access to ALL systems including NBA, College sports, NHL, Horse Racing and even Soccer! 50+ winning system in one! P.S. Dont be fooled by scam artists, always check long term verified results and follow what works!