NFL Week 4 predictions: No lull in big games on the gridiron

NFL Week 4 sees some major divisional rivalry games taking place. The AFC North highlights the weekend with the Cleveland Browns taking on the Baltimore Ravens and the Cincinnati Bengals playing against the Pittsburgh Steelers. 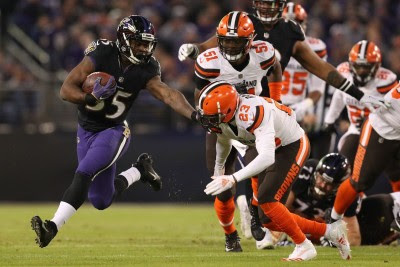 Yes, old rivalries will be renewed this in NFL Week 4. This week, we predict the winners to the AFC North games and select one more for you.

Let’s start in Baltimore where the AFC North’s first-place Ravens host the Cleveland Browns. The bandwagon in Brownsville hasn’t broken down, but it is getting very close. The hype was high but Baker Mayfield and the offense has struggled. The quarterback as three touchdowns and five picks in three games.

Cleveland is 1-2 and could draw level with Baltimore in wins and losses on Sunday. Of course, they need a big victory. The Browns have only won 10 times in 40 meetings with Baltimore since 1999. History is not on Cleveland’s side.

Baltimore is coming off of a 33-28 loss to the Kansas City Chiefs. Coach John Harbaugh will be looking for a reaction from his team. Quarterback Lamar Jackson threw for 267 yards last week but no touchdowns. The Ravens defense managed just 1.0 sack on the day.

Cleveland did defeat Baltimore last season. That game, however, was played in Cleveland. Expect Baltimore to rebound in a big way after Week 3′s loss to the Chiefs. Cleveland’s play-calling and execution have been lackluster. Mayfield will struggle as Cleveland lose big.

The Cincinnati Bengals will play archrivals the Pittsburgh Steelers on Monday Night Football. The big question is, will anyone watch the game?

The Bengals and Steelers are both 0-3 with each giving up over 83 points in three games.

Ben Roethlisberger is finished for the season after having surgery on his right elbow on Monday. There goes that huge contract the Steelers signed him to in the offseason. Perhaps they should have made plans for the future before being thrust into it by the 37-year-old’s injury.

Speaking of quarterbacks, the Bengals have one of the league’s worst. Andy Dalton had a rating of 63.3 in Week 3 against the Buffalo Bills. He completed less than 56% of his passes and threw two picks.

Will the Bengals win a game this season? Well, it won’t happen in Pittsburgh. The Steelers may be bad and playing a back-up quarterback, but they will get the win at home.

The big news swirling around the Buffalo Bills during the offseason concerned a potential relocation due to the city’s market size and the lack of a new stadium.

Out of that swirl of news has come a 3-0 start to the season with the Bills and New England Patriots playing for the AFC East lead on Sunday.

The Pats are also 3-0 and have allowed a league-low 17 points after three games. New England allowed 14 points to the New York Jets in Week 3, the most they have allowed in a single game this season.

The Bills, who have won two games by less than four points, have their first real test of the season. As much as everyone (including me) wants to see the Patriots loss, it just won’t happen. The Pats are just as good as they have been the last decade. The Bills will crash to Earth and lose to England for the sixth straight time.