NFL Week 8 is headlined by the Green Bay Packers playing the Kansas City Chiefs at Arrowhead Stadium. The two NFL teams are atop their respective divisions and the match-up could be a preview of this season’s Super Bowl.

NFL Week 8 will see 14 additional games. The rest of the weekend’s games do not have the intrigue of the Packers versus Chiefs, on paper. However, that doesn’t mean the rest of the league’s games won’t be exciting to watch and wager on. 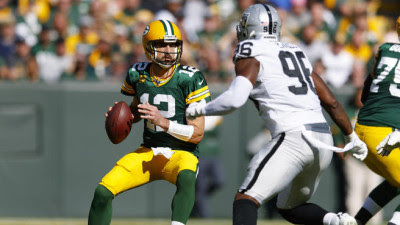 The Packers are playing great football and Aaron Rodgers is my pick to win the NFL MVP award. Rodgers is currently second behind Seattle Seahawks quarterback Russell Wilson in MVP odds at +400.

The Packers won against the Oakland Raiders last weekend 42-24 with Rodgers throwing for 429 yards and five scores. I expect Rodgers to have another big weekend in Kansas City. The Chiefs are playing with back-up quarterback Matt Moore. Although he led Kansas City to a 30-6 win over the Denver Broncos, that game was against a team that is currently 2-5.

Green Bay will win in Kansas City. The Chiefs have lost twice at home this season already to the Houston Texans and Indianapolis Colts. Make that a third time now with Mahomes out and Rodgers playing well.

Two burning hot teams will play in San Francisco as the Carolina Panthers arrive to play the 49ers. The 49ers are a perfect 6-0 and will have all the confidence in the world going up against the 4-2 Panthers.

The Panthers have been solid since starting the season 0-2 as they have won four straight games. Carolina is coming off of a bye week while the 49ers won against the Washington Redskins 9-0.

Jimmy Garoppolo only threw for 151 yards and a pick against the Redskins. With such a narrow victory against the Redskins, I believe Sunday’s game against the Panthers will be very close. The 49ers have been playing such good football and it will see them win at home despite struggling against Washington. Carolina is coming off of a bye which will result in a bit of rust in San Francisco.

San Francisco 49ers TT: Under 23.50(54%)
Arizona Cardinals vs. New Orleans Saints
I didn’t think the New Orleans Saints could go into Chicago and beat the Bears in week 7. I was wrong as the Saints won by 11 and quarterback Teddy Bridgewater threw for 281 yards and two scores.
The Saints go up against the Arizona Cardinals in NFL Week 8. The Cardinals are 3-3 in the NFC West and sit in last place. However, the Cardinals have won three straight games. Keep in mind, the Cards have beaten Cincinnati, Atlanta and the New York Giants, which have a combined three wins.

New Orleans should continue their strong play and end Arizona’s winning streak. Bridgewater will continue to play well on the offensive side while the Saints’ defense will keep the Cardinals at bay.
Winner: New Orleans Saints
Point Spread forecast: -10.5 (28%) on NO
Total points: Under 48