NFL Week 15 picks: Who will clinch a playoff place this weekend?

Three NFL team have clinched playoff spots heading into NFL Week 15. The Baltimore Ravens, Kansas City Chiefs, and New Orleans Saints are assured of playing in the postseason. Which teams will join them and clinch this weekend? 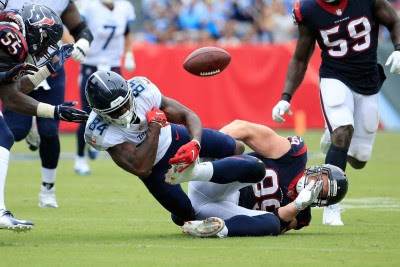 The playoff picture is still wide open and this week, we take a look at three games that will have a direct impact on the postseason.

Nashville will host a huge AFC South game between the Houston Texans and the Tennessee Titans. The Texans are atop the South and in the playoffs currently as the No. 4 seed. The Titans are on the outside looking in and the next best team to make a wildcard.

The trend of the home team winning in this series should continue with Tenessee picking up a win and knocking Houston out of the playoffs with two games to go.

The Buffalo Bills travel to Pittsburgh to play the Steelers as both teams seek to solidify their playoff places. It is likely that the loser of this game will fall out of the playoff places if they are not holding onto a spot by their fingertips.

The Bills are the current No. 5 seed while the Steelers are No. 6. The Steelers have the momentum going into this game. Not only are they playing at home but they are winners of three straight games. Their three wins came in low-scoring games as they averaged 19.7 points per game.

Buffalo is coming off of a loss to the Baltimore Ravens, 24-17. There is no shame losing to the Ravens as good as they have been. However, Buffalo must get up for a game against the Steelers, which I think they will struggle to do. These teams haven’t met since 2016 when the Steelers won 27-20. Pittsburgh has won four of their last five games against the Bills.

The Green Bay Packers go into NFL Week 15 as the No. 2 seed in the NFC playoffs. Things can change quickly as they play their biggest rivals the Chicago Bears.

Green Bay defeated Chicago in Week 1 10-3. The Packers have won six of their last seven games against the Bears. Chicago is the eighth seed to make the playoffs and would take a big step toward possible postseason qualification with a win.

The Packers’ dominance of the Bears has been exceptional and that should continue in NFL Week 15. The last four games between the two rivals have been decided by seven points or fewer. This should be a close contest with the Pack winning by a narrow margin.